Gorizia and Nova Gorica are twin cities along the Italian-Slovenian border. This competition proposal explores how to link the two towns by adding a third element, à Tertiary Forest, which is a new urban public space and a cool island in the center of the new agglomeration.

This urban space is divided into different sectors, trees, permeable humidity-retaining mineral pavement, and urban furniture. The project is not to create a park or even a piece of nature in the city, but to offer a new type of urban space: a city and a forest combined.

Counterposition between nature and human construction puts the focus on sustainable urban planning, especially in light of global warming and rising temperatures in urban, concrete, non-green areas. On the north-south axis, we planned to connect the Panovec forest and the banks of the Soča River with a green belt (and establish a connection between the bicycle path on the right side of the Soča River with the one connecting Nova Gorica and Šempeter).

Cool Island Project proposes a new typology of urban space,  a continuous urban space, and a forest at the same time. Usually the planted spaces are separated from the paved circulation spaces in a city. Here a new type of ground covering enables us to create a continuity of urban space, permeable and yet enabling different uses such as car circulation, pedestrian gathering and bike lanes.

This green belt would actually create forests that would coexist with urban infrastructure. Built of special “permeable concrete”, roads and pedestrian surfaces would coexist in the same spaces as trees to form an urban park. Along the green belt, there will be multi-purpose elements are planned for events or socializing to be used for sports, leisure, and cultural events. As cities get warmer traditional open and concrete squares are no longer comfortable for use during the summer. The trees would provide lots of shade and new places for private gatherings, for meetings with friends and families. The trees are placed strategically to catch the wind torrents. During hot summers the breeze will catch the cooled air in the treetops, during autumn it will help to break the strong wind.

To organize the master plan, tree plantation follows the wind simulation: prevalent summer breeze coming from the south east over Panovec wood is a source of fresh air. The ‘wind simulation’ shows where the wind currents are stronger making these places naturally cooler. The trees are planted more densely in windy areas.  The combined cooling effect of trees and wind creates islands of more fresh air all along the border, stretching from the Soča river in the north and Vrtojba in the south.

A new pedestrian bridge will link the Slovenian side from Rejčeva street and the shopping center quarter to the Italian side of the Piazza Transalpina. With a very slow slope, it is accessible to bikes and wheelchairs and slowly rises in between the trees to offer an uncommon experience of walking in the middle of the canopy. It is planned for the urban center to become an epicenter of diversity where contrapositions meet in order to connect and establish new formats of use: responsibility and care, without losing its history, tradition, identity, and uniqueness.

The square plan. The pavement is made for the road as well as for the bike lane or pedestrian walk. It is uniting facilities of the space where people are suggested to share the same space in different activities. Why try to think about future cool cities as a step towards usage that crosses its habitual arrangements, and instead of being static in its composition it activates old ways and makes the spaces more exciting and economical in its utilization. Different users that share the space are adapting their speed, habitual movement to the gathering area of the tree-payment-cooling environment. At the same time, the heavily planted forest-like area remains accessible for pedestrians and even vehicle traffic. It is stretching throughout the in-between space of two cities. The different densities of tree planting create various atmospheres and types of spaces; some are bigger to accommodate public events and others are more intimate to offer more privacy and quiet space.

It is a permeable humidity-retaining mineral pavement that stores rainwater and prevents overheating of the ground through evaporative cooling. Rainwater percolates through the material and irrigates the trees. Trees and ground material combined provide an innovative approach to urban rainwater use for climate change mitigation in an urban setting.

The new Cultural Center – the EpiCenter, is organized as several smaller pavilions. There are five buildings that shape the public program of the new center: exhibition halls, a multifunction hall for lectures and presentations, an info point, and a cafe on the roof with a view to the new square and surrounding landscape and landmarks. They are placed around and underneath the existing trees which organize the spaces and courtyards. To take advantage of the Mediterranean climate and the tradition of the outdoors, the space between the buildings is planned to be used for outdoor events, such as concerts movie nights, exhibitions, etc.

The pavilions function as a whole and can be used independently. Each of them is equipped with basic facilities, like lavatories and storage, so they could be rented out separately. The pavilions are planned to be linked together by the courtyards and create one big exhibition space. As well the lecture room with the workshop spaces that is located in the bigger building is divided by sliding partitions. The info point is centrally located and creates a focal point on the square and it’s also the link between the higher level of the bar-terrace, the bridge, and the ground level.

The building is open to the square with a direct connection from the main exhibition space, and it organizes the square by creating a hierarchy of spaces between the main public one in front of the train station and the smaller more private courtyards of the new Cultural Center. The Epicenter, through it scale and its different buildings, manages to integrate itself on the square next to the train station, respecting the existing buildings. It participates in creating multi-functional public space for both communities of the subject

The aim of our project was to connect the counterpoints, by preserving their own identity and uniqueness. First, to connect the population of both cities by breaking down barriers that make movement and gatherings difficult. By connecting the two city centers on the east-west axis and overcoming two barriers (border fences and railways), we have opened a space for inhabitants to use, enjoy and move in a more sustainable way on foot or by bike. This was a synthesis: the creation of a new center of conurbation between Gorizia and Nova Gorica.

Terciary Forest behind the train station

The bridge lands on the roof of the cultural center

Plan of the square 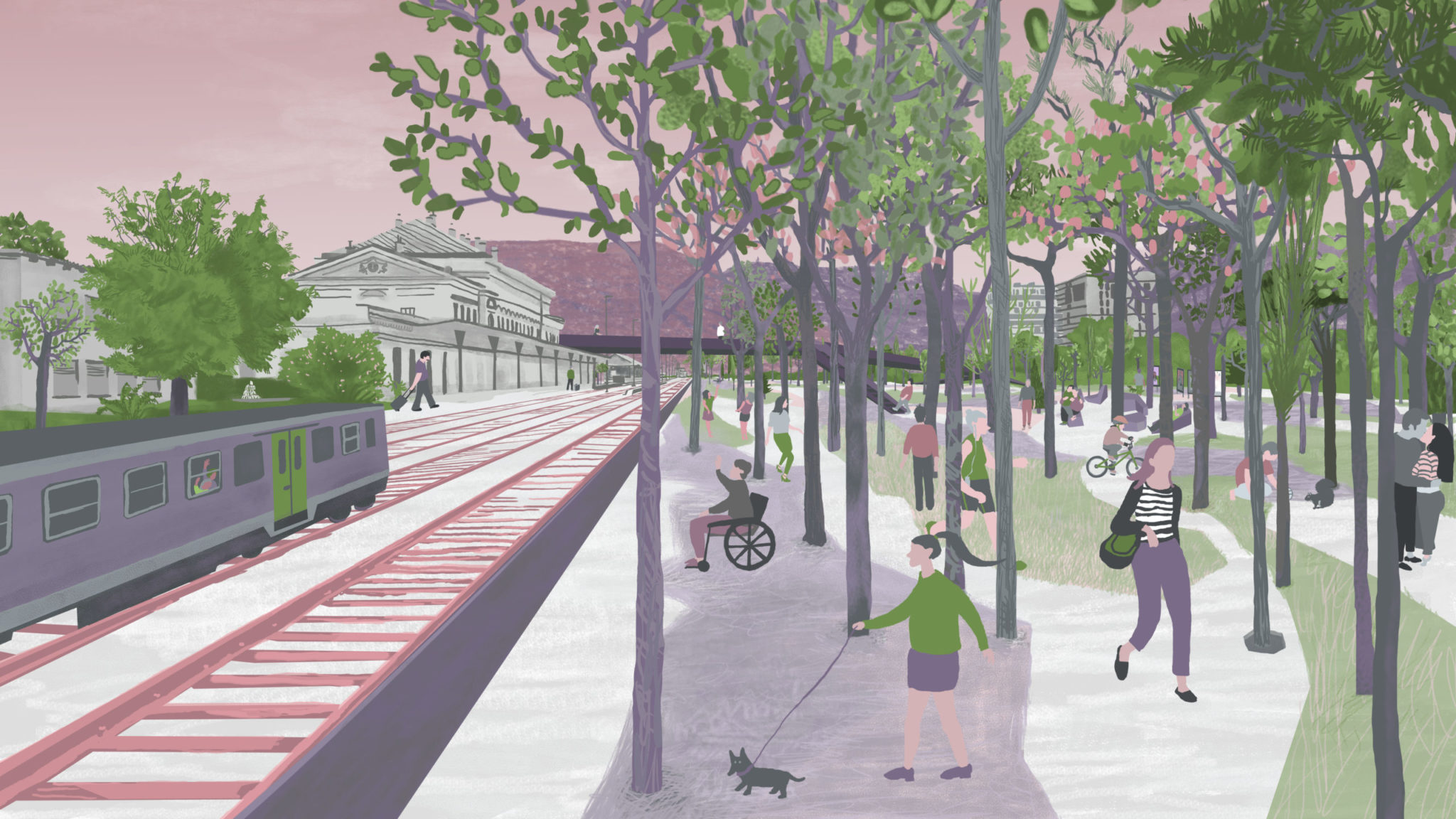 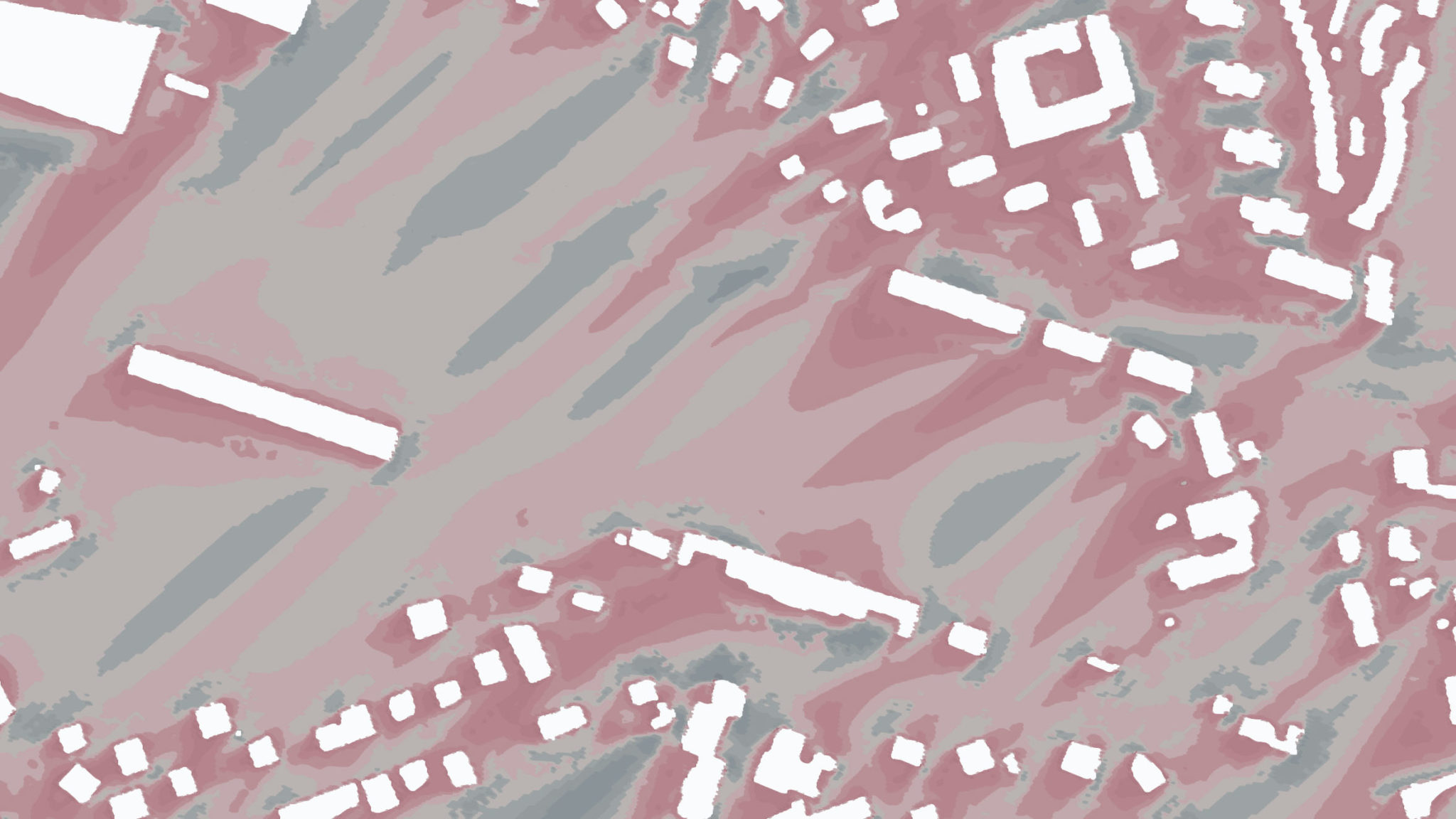 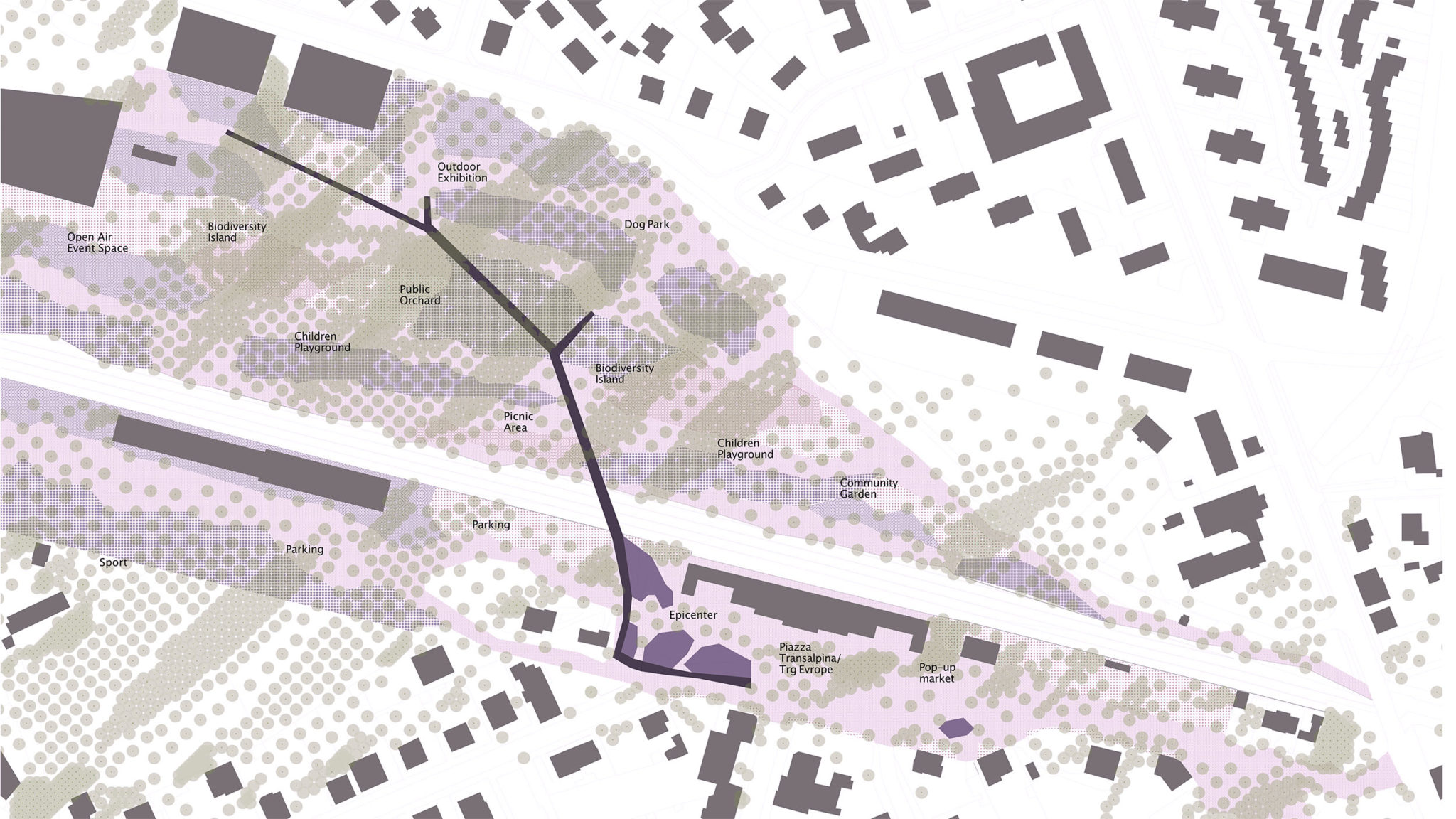 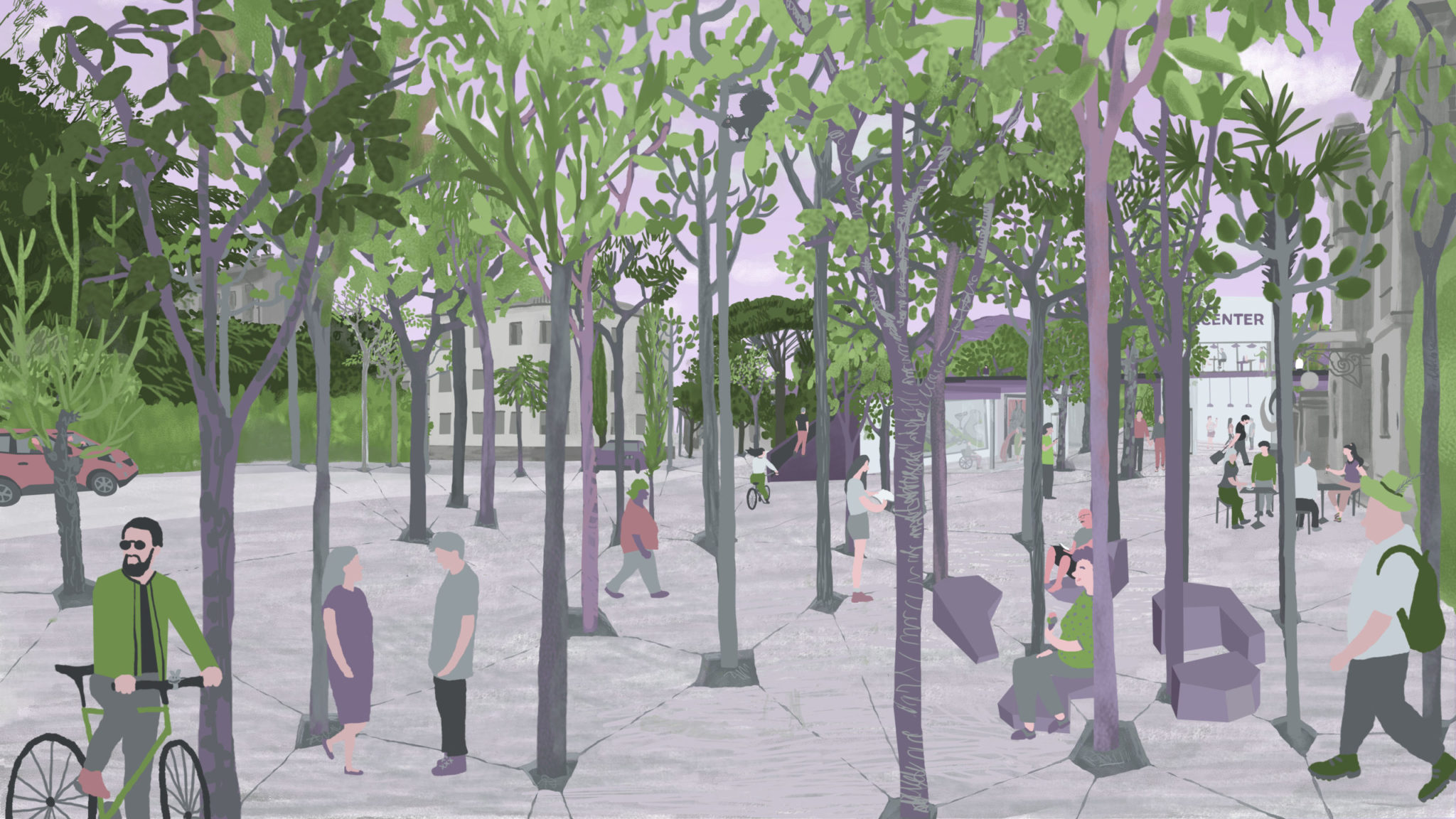 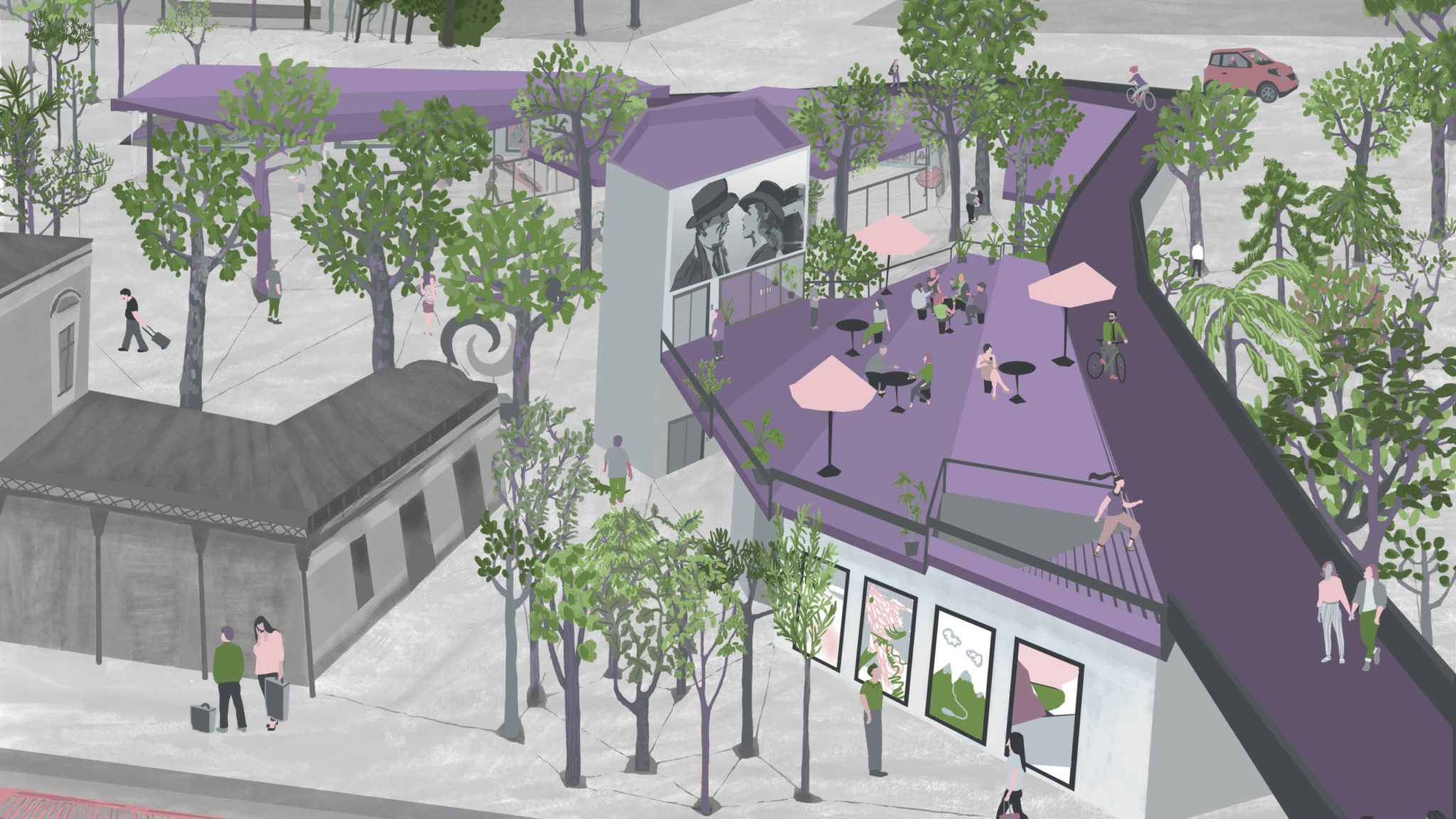 The bridge lands on the roof of the cultural center

Plan of the square 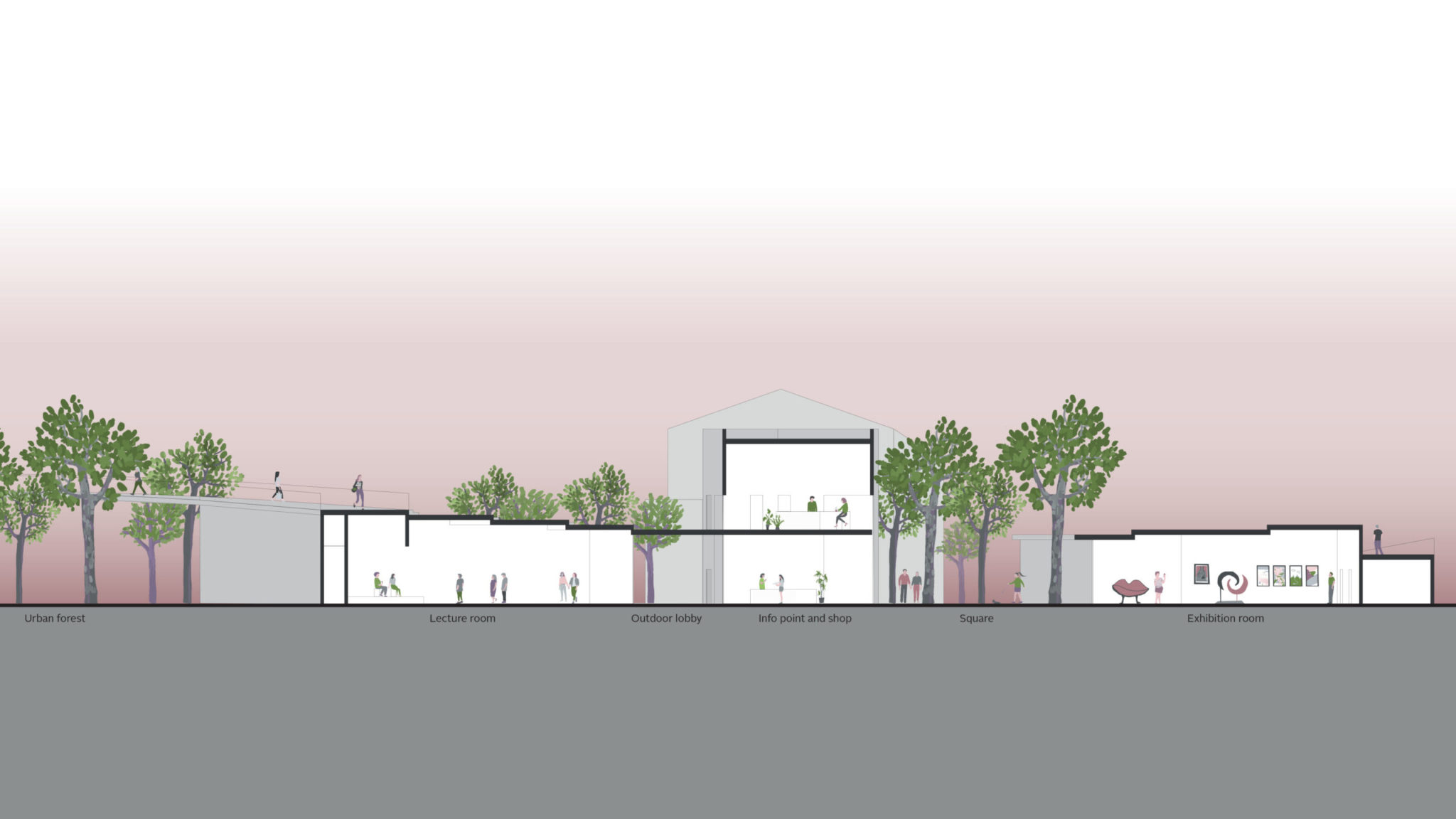