Since cities tore down their walls, we do not know anymore how and where to place the distinction city/nature which structured the history of great civilisations.

Gwanghwamun square is the heart of Séoul as well as the Republic of Korea. It is the symbolic spatial manifestation of the governing institutions dating back to the Joseon period. Modern Korea was built on these founding principles. Hence, the square retains its historic value until today. However its present form no loger satisfies the needs and wishes of the citizens. The competition for the New Gwanghwamun square is an opportunity add new meaning to this place of origin and carry its symbolic legacy into future.

What are today’s challenges facing Korean society? How can the New Gwanghwamun square provide answers for contemporary issues which concern all citizens?

The multifaceted nature of these questions and reveal the spatial, symbolic and historic dualities of the site. The answer to these contradictions does not lie in partial solutions but in the acknowledgement of a larger issue of human attitude towards the environnement. How will we adapt to the changing climate and how can we prevent its acceleration?

The built environnement is the root cause of the undesirable climatic effects we are facing. These phenomena are further accentuated in dense urban settings. Cities largely contribute to climate change and at the same time they are at the most vulnerable. Environmental issues in urban settings have sanitary consequences and these will only be accentuated in the future. Urban heat island phenomenon, for exemple, accentuates summer heat waves. Therefore any new intervention in urban public space must not only avoid negative climatic influence but strive to have a positive effect on the urban climate.

Contemporary cities must find solutions for these issues which take root in the nature of the city itself: buildings and impervious pavements covering the ground leaving little room for vegetation. Rainwater is concentrated and promptly evacuated instead of being treated as a precious resource. The remaining vegetation is seen as decoration rather than a necessary infrastructure for the confort and well-being of the citizens.

New Gwanghwamun square will be an urban cool island. Trees will provide shading and cool the air through evapotranspiration. Previous ground surface allows uninterrupted tree growth, stores humidity and prevents heat accumulation in the pavement material which is the main cause of urban heat island. Besides, rainwater will be infiltrated on site thus decreasing the risk of flooding.

Forest plantation plan follows the yearly sun irradiation map. The highest tree density is found in the most exposed areas where heat accumulation is most intense. Tree density decreases progressively until it reaches most shaded areas next to existing buildings. A variety of programs find their place in the planation gradient ranging form very dense to spread out individual trees.  The north is the historic square in front of the Gwanghwamun gate. Trees in this area have high canopies to preserve the view of the palace and allow for official events to take place. South of the new road is a densely planted area dedicated to leisure and sports activities. In front of the Sejong Center for Performing Arts is the space for cultural events and outdoor performances. Even further south is an area which connects with busy commercial activity in the neighborhood. This space is equipped with all infrastructure for an open air market or street-food festival, for exemple. Facilities and temporary amenities are spread all over the square.

Rainwater is a valuable resource for urban environnements and it will become even more precious in the future as temperatures will rise and heat waves will become commonplace. Adiabatic cooling through rainwater evaporation is the only passive means to effectively lower the air temperature without any input of external energy.

All rainwater will be treated on the surface and infiltrated on site. The will be no need for an underground rainwater evacuation network. The entire ground surface of the project, including the roads, will be covered with pervious concrete at varying degrees of permeability according to existing underground infrastructure and the use of space on the surface. Three main permeability levels will be established: rainwater reservoir, rainwater infiltration areas and stormwater infiltration basins. 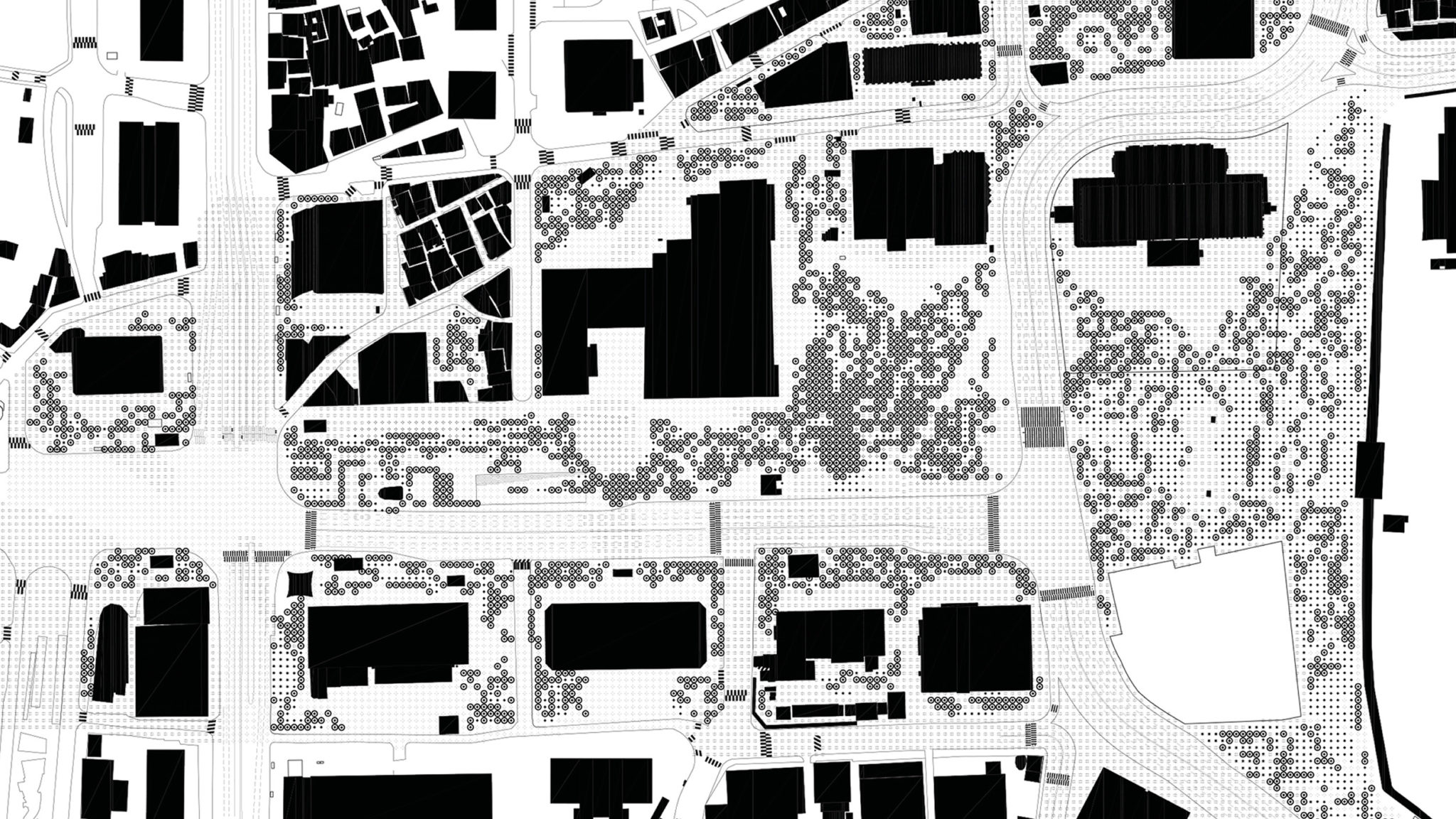 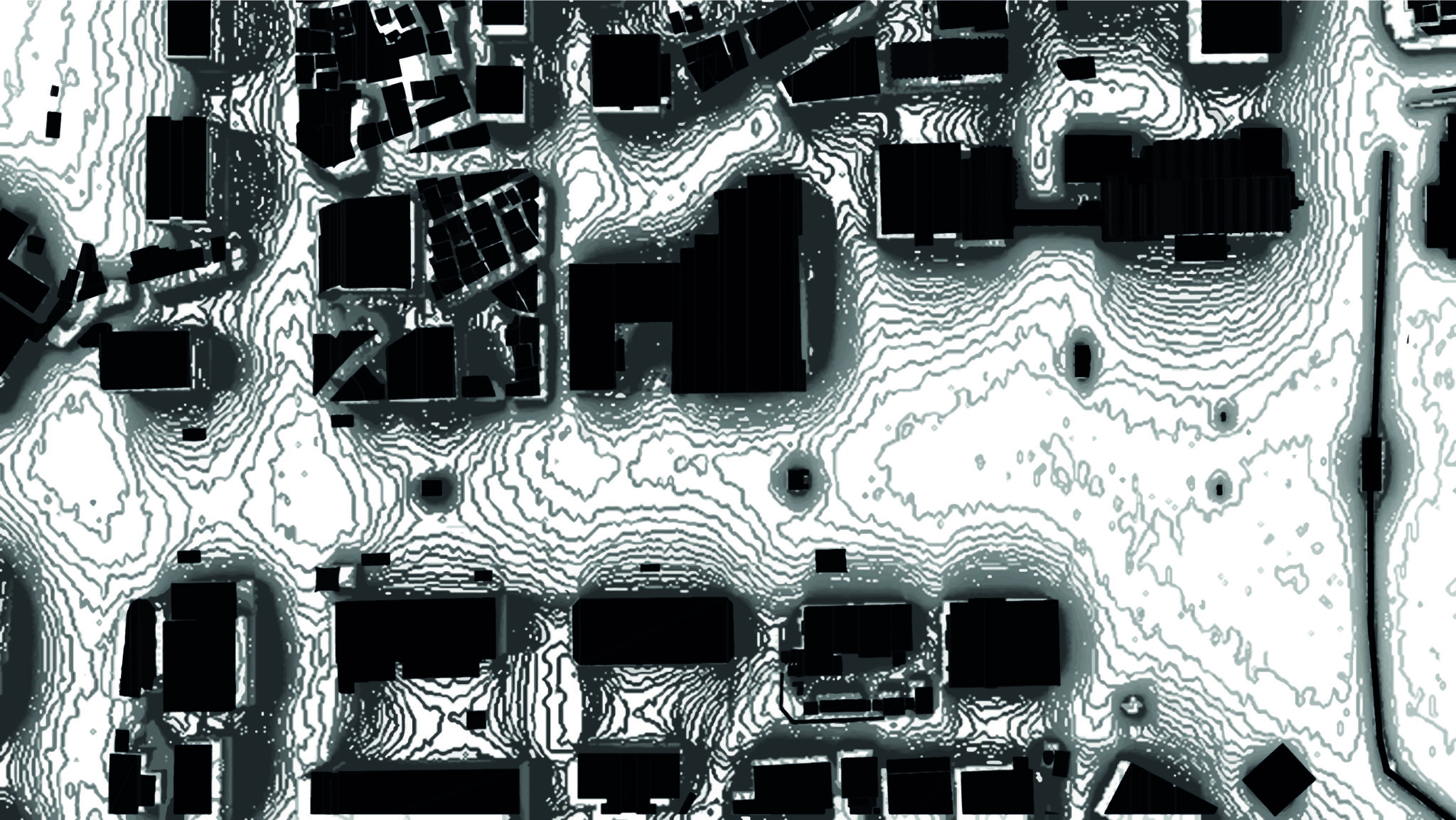 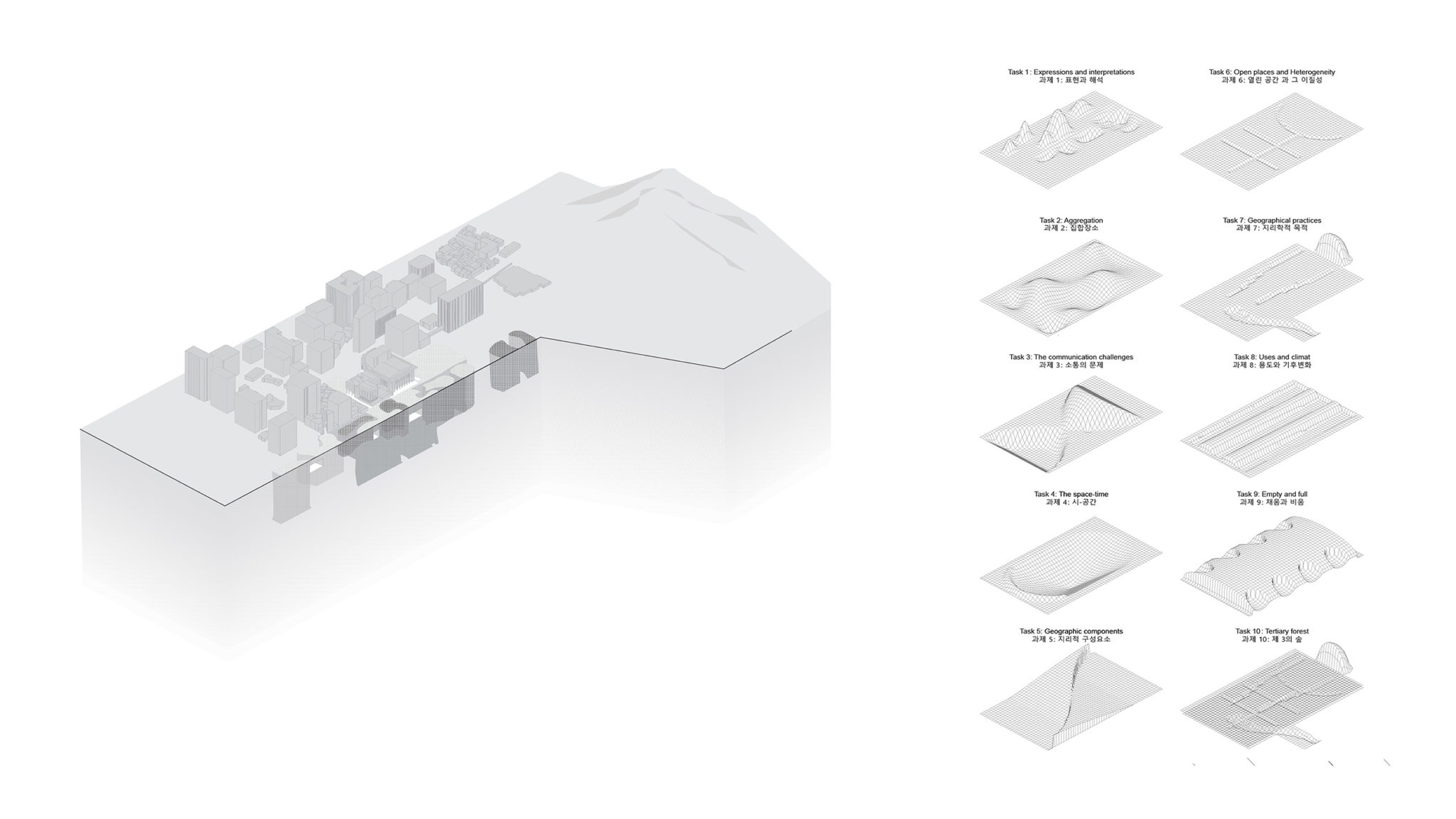