The limit which separates the army base from the rest of the territory will disappear. In an instant the city limit will spread out into a vast ne unknown terrain with some existing buildings and streets. The people of Metz will discover a new territory at the edge of their city. The mysterious white patch on the map will disappear. What will we find in its place? What will do there now and in the future?

Towards a new part of town

An urban project of this scale deals with a complex set of issues; social, economic, environmental. Concerning the site of the former military base 128 more specifically there are two main topics which need to be addressed. Firstly there is the question of what to do with the enormous open space which became available at the edge of the city and secondly, the issue of how to integrate this new land in the existing urban structure. The two topics are addressed in parallel. They complement each other in order to achieve the site conversion from a restricted military zone to a publicly accessible city district. In summary, we must integrate the former military base in the urban pattern of Metz and give the site a new meaning in terms of use.

The airport infrastructure is characterized by its immense scale and regularity. Along a distance of 2500m from north to south, the altitude varies by less than one meter. The original function the airfield is now obsolete and a new meaning has to be given to this remarkable landscape. According to the French public policy (Vers un mix électrique 100% renouvelable en 2050 among others) renewable energy production facilities have to be developed. An installation of a landscape infrastructure composed of solar panels is added as a second layer on site. It allows the site to preserve its historic infrastructure function while at the same time permitting the development of urban agriculture, leisure and sports activities on the ground.

Integrating the site into the territory of Metz metropole

The integration into the urban surroundings takes place in a longer process. At a first step the site is made accessible and opened to the public. Viable connections between the existing road networks in and immediately around the site are necessary, to connect the site with greater Metz. A new east-west link across the site between Marly and Actisud is established. Pedestrian and bicycle access points are to be implemented around the site, bus stops on site ensure its integration in the Le Met’ public transport network. A grid of bike and pedestrian paths offers shortcuts on site and strengthens the east-west connection between the surrounding neighbourhoods. The velo route along the two rivers Mosel and Seille will be linked by a new bike path through the site. In the long term, parts of the adjacent neighbourhoods can grow over the site limits and merge with the site by densifying the existing built structure. This densification process should start from the east end west limit.

The second issue deals with giving new meaning to the area since its military use became obsolete. According to demographic and economic projections the refurbishment of existing buildings on site offers sufficient space to satisfy the needs of Metz metropole in terms of housing, retail, office, hotel and storage space. As a result, much of the open area of the former airport will remain unbuilt in the near future. The airfield and its surroundings form a flat prairie split up by concrete slits of the runway and two taxiways. The solar structure is composed of a layer of third generation energy producing dye-sensitized solar cells and covers the largest horizontal portion of the airfield.

The solar landscape varies in height from 5 to 15 meters above ground as well as in density of panels and their colour. The shape of the structure is derived from the altimetry data of the ground. Close analysis of this data shows minor variations in height ranging from 189m to 190m above sea level. These variations are multiplied by ten and extruded in height. The general shape and colour of the solar landscape is a magnified reflection of the prairie on the ground. Thus, the former military airbase becomes a new kind of urban landscape for people to inhabit and at the same time it supplies energy to the city.

ADEME (Agence de l’environnement et de la maîtrise de l’énergie) made a report on renewable energy supply in France for 2050. They predict it would be possible to cover 100% of the country’s electricity needs from renewable energy sources at roughly the same price as electricity from nuclear power. There are several renewable energy sources: wind power, solar power and geothermic, biomass, hydraulic. Wind and solar power will add the largest part to the country’s energy mix. The share of each source depends on the region. In the case of Lorraine nearly 75% of energy will come from solar power. Which is about 16GW. Considering that a typical solar power-plant in Europe (Muhlhausen, Bavaria) produces 5 W/m2, means that Lorraine should install 3200000000m2 of PV panels (16GW/5W/m2). That is 320 000ha. The total surface of Lorraine is 2 354 700ha. So we see that 7.35% of Lorraine should be covered by PV panels by 2050. This raises an important point concerning the public acceptance of renewable energy power-plant installation and their impact on landscape.

In the case of Lorraine we see that in order to produce the necessary amount of electricity there will be an impact on landscape. This means that the renewable energy power-plants will be a part of the landscape of the future, just as roman aqueducts, industrial era railroads, canals or bridges in the past. Some of this infrastructure is today considered as important landmarks and part of identity of an area, for instance le Pont du Gard or canals and windmills in Holland. Renewable energy production facilities have so far been considered purely from an engineering point of view and placed far from urbanized areas. In the future this will no longer be possible as we will need to build many more such facilities. An urban type of large scale solar energy production facility needs to be developed. That is a landscape infrastructure which combines energy production with a recreational area, a park, a plantation, a public space or a street.

A dye-sensitized solar cell (DSSC) is a third generation low-cost solar cell belonging to the group of thin fi lm solar cells. DSSC technology goes back to 1960 when it was discovered that illuminated organic dyes can generate electricity at oxide electrodes in electrochemical cells. A modern DSSC is composed of a porous layer of titanium dioxide nanoparticles, covered with a molecular dye that absorbs sunlight, like the chlorophyll in green leaves. The DSSC is simple to make using conventional roll-printing techniques, is semi-flexible and semi-transparent, most of the materials used are abundant, non-toxic and low-cost.

Although the their efficiency at full sun irradiation is lower than perfectly oriented conventional silicon based solar cells, DSSC is more efficient at lower light intensities, such diffuse hazy or cloudy days often seen at higher latitudes as well as at dawn and dusk. Moreover, a smaller angular dependency allows dye-cells to be installed horizontally. Therefore their performance, considered in terms of annual production average, is comparable with conventional photo-voltaic technologies. The DSSC price/performance ratio will allow them to compete with fossil fuel electrical generation by achieving grid parity. The European Union Photo-voltaic Roadmap forecasts they will significantly contribute to renewable electricity generation by 2020.

A 4-person household consumes about 4000 kWh per year (heating excluded). A solar energy plant with a power rate of 10 MWp can supply 2.500 households. The necessary surface of conventional crystalline silicon photo-voltaic solar cells for this power-rate would be 6.6 hectares.

The total area of the solar landscape is 101.6 hectares. The density varies from 100% to 30% with an average density of 65%. The total surface of the solar cells amounts to 66,05 hectares. Considering that the most advanced dye-sensitized solar cells are 25% less efficient than the best conventional photo-voltaic panels, it is estimated that the solar landscape installed on site has a power rate of about 75 MWp. It can therefore can supply around 18.750 households.

Solar landscape suspended above new circulations and program on the ground. 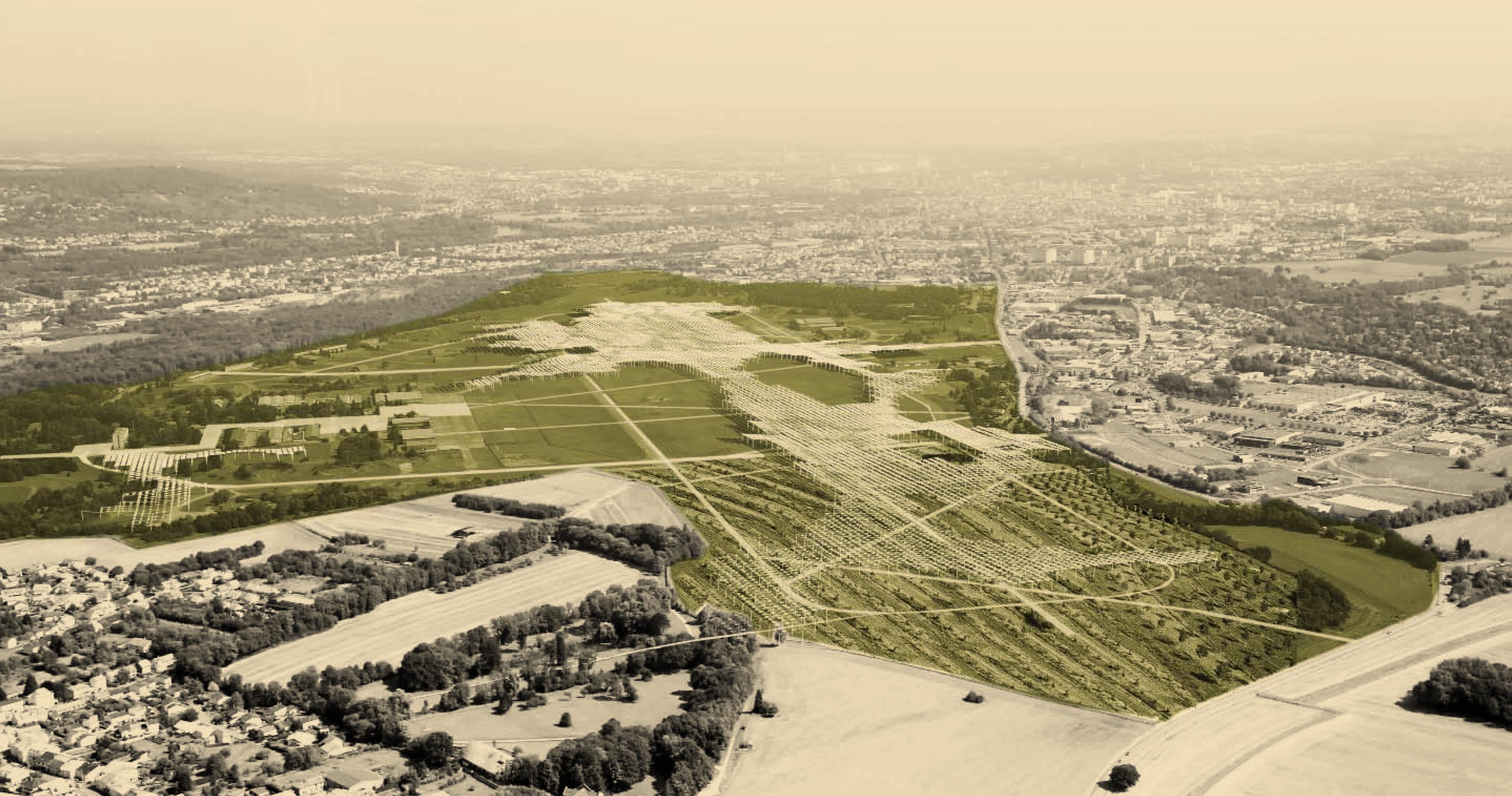 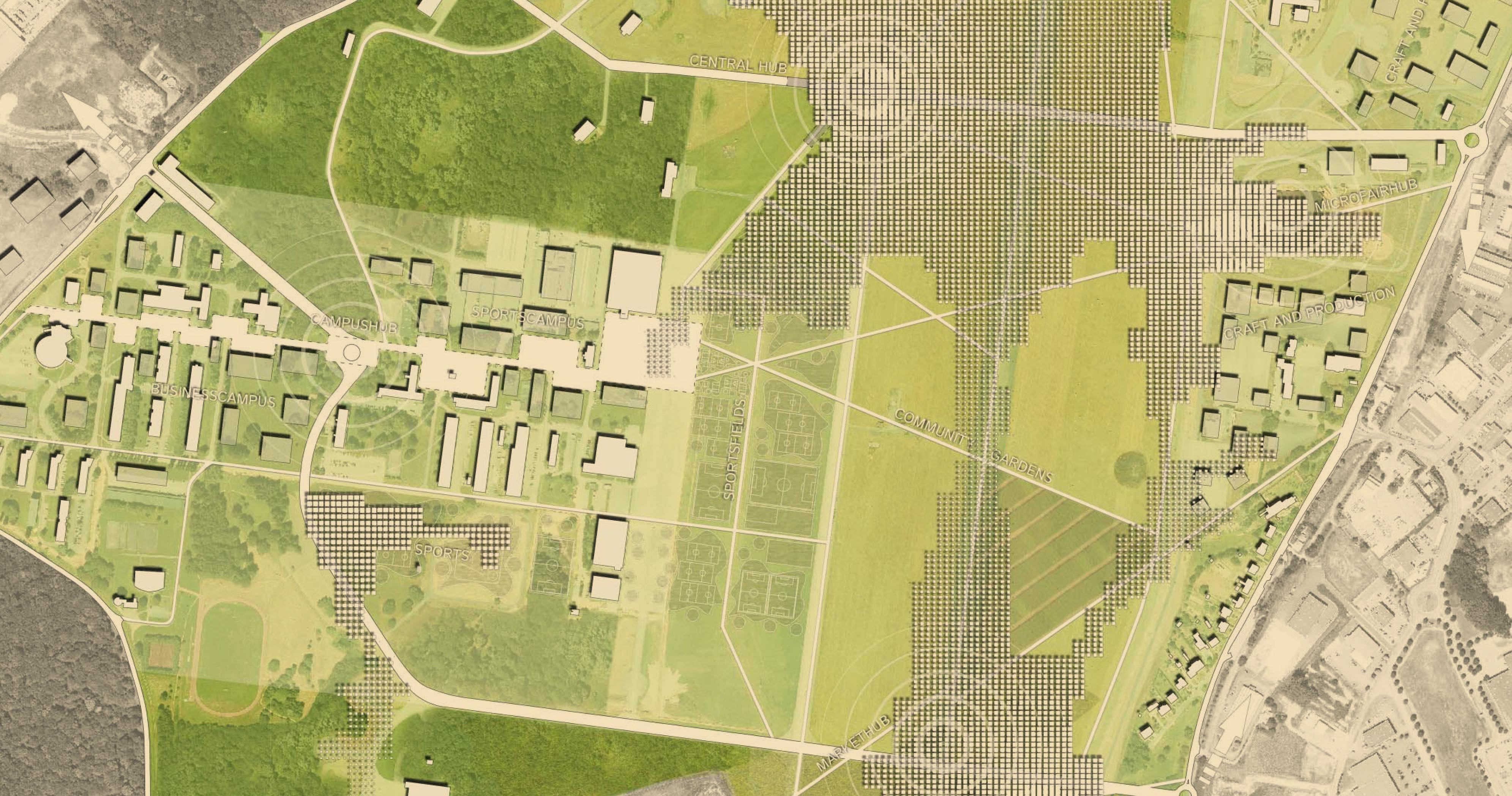 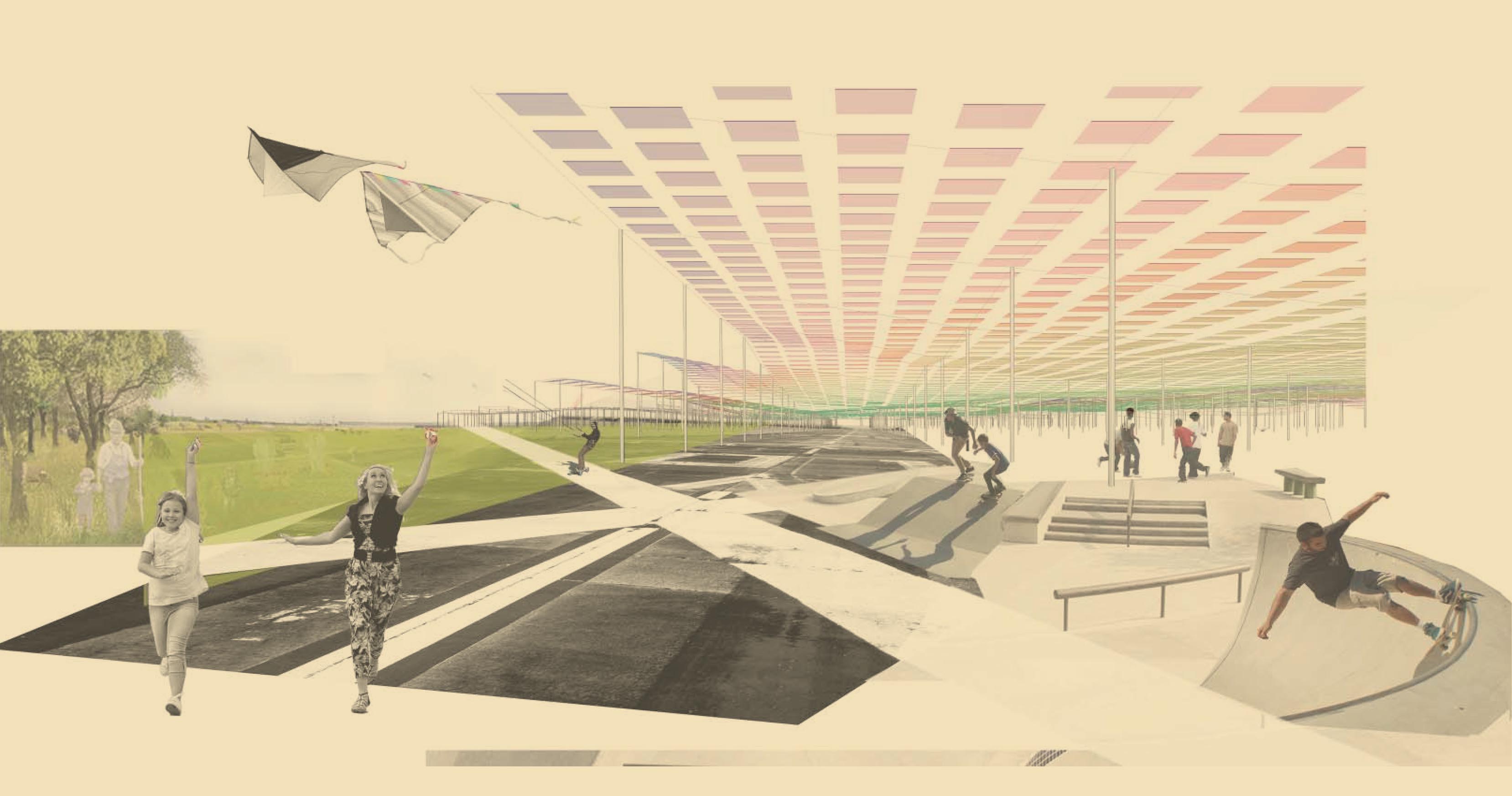 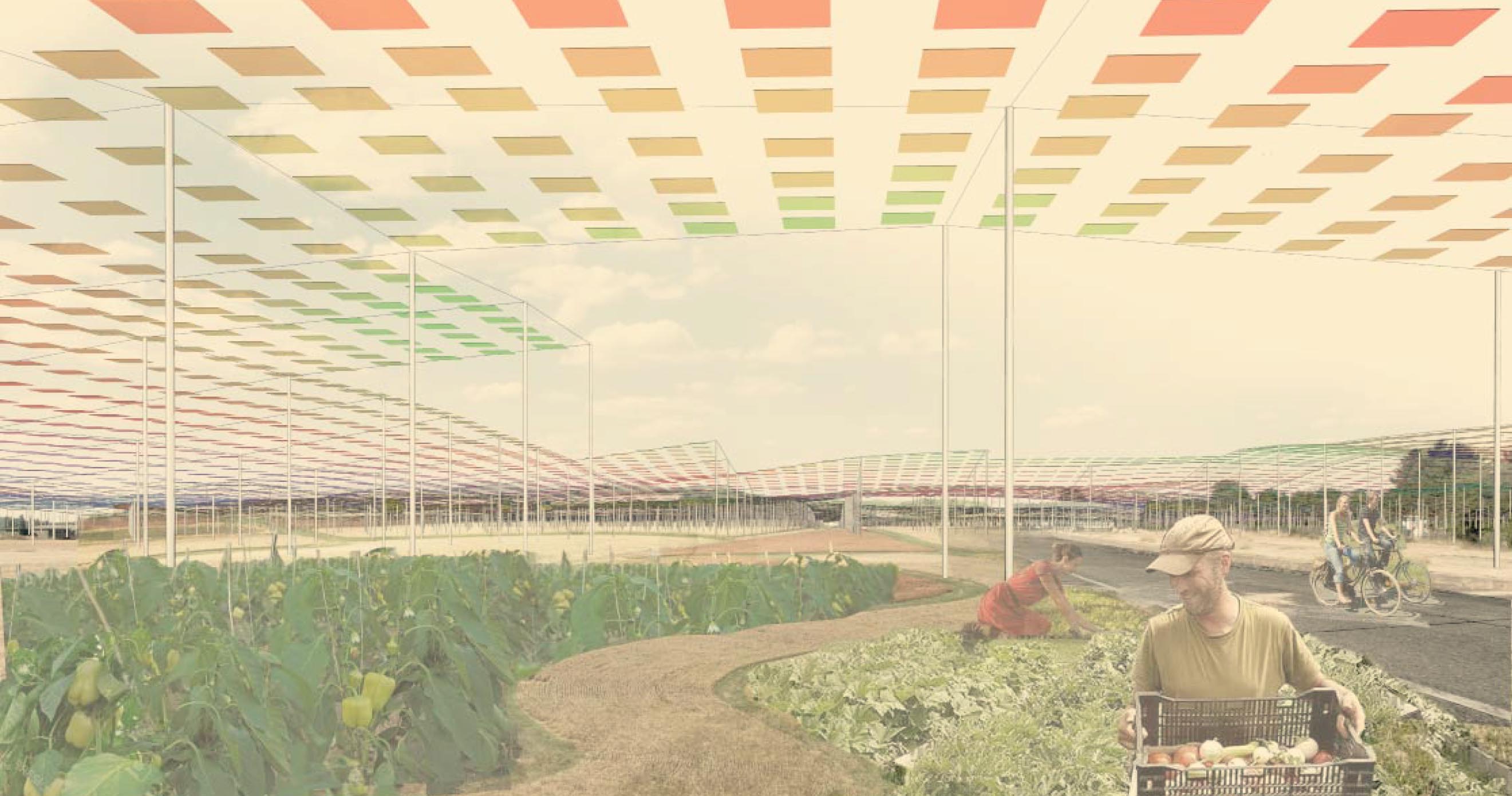