The challenge of this project was the relationship between a new large scale building for 1500 people and the unique small scale historic urban typology of Paraty. Existing building pattern creates the identity of the town and provides a scenic background for the new Congress Center.

Paraty is located in south of the state of Rio de Janeiro in Brazil. The historic center of town is candidate for inscription to the UNESCO list of World Heritage. The exceptional character of the site comes from the fact that the urban typology of narrow cobbled streets and small scale buildings dating from the times of Caminho do Ouro has been preserved until today. Paraty has successfully resisted urban transformation throughout the 18th , 19th and the 20th century. Much of the historic architecture of the city has not changed for 250 years or more. The challenge facing the city today, is how to reinvent itself for the 21st century.

In recent years tourism has become the main economic activity of the area. Paraty’s exceptional natural setting and historic character make it a perfect destination for cultural tourism. The city already organizes many cultural, musical and religious festivals, most prominently the FLIP (Paraty International Book Fair). These events attract many visitors and consequently demand a new kind of infrastructure: exhibition spaces, auditoriums, meeting rooms and parking areas. The new Centro Cultural de Eventos e Exposições will provide the city with a large space for public events and boost its economic and cultural development.

The site of the new Centro Cultural de Eventos e Exposições is situated north east of the historic center, in the Jabaquara neighborhood. Like the old town, this recent part of the city follows a regular urban grid. The blocks in the vicinity of the site measure 120 meters by 60 meters. The site of the project covers two city blocks in the prolongation of the Avenida Vera Cruz and rua Pedro Segundo in the direction of the rodovia BR101 Rio-Santos. In time, the Paraty agglomeration will spread in the Caboré area between the BR101 and the Jabaquara neighborhood. The extension of the existing urban grid for this competition is the first step of this process. In the future the Centro Cultural de Eventos e Exposições will be in the center of the neighborhoods north of the Perequê-Açú river. The large size, covering two entire blocks and the public nature of the program, make this edifice an exception in the future urban tissue. In addition, a public project of this importance is an opportunity for the city not only to fulfill its need for new infrastructure, but also to improve the living environment of the local population. The Centro Cultural de Eventos e Exposições will occasionally house cultural events, the rest of the time the site could be used as a public space for the surrounding neighborhood and tourists. The project must therefore consider not only the programmatic demands of the client, but also its urban role in the future development of the city.

In order to fulfill this double programmatic mission and to establish a respectful relationship to the urban tissue of Paraty; we have imagined the Centro Cultural de Eventos e Exposições as an intricate interplay of interior air conditioned spaces, covered open air enclosures and exterior spaces. The cultural center is a collection of small scale independent buildings which cover the entire site. The constant distance between individual building blocks allows the fresh breeze from the see to freely penetrate in the center of the site and naturally cool the large open air exhibition areas or public squares. The required program is distributed according to the requirements for maximum comfort of visitors as well as employees.

The main concern in humid tropical climates; the climate in Paraty, is thermal comfort. Over the course of a year, the temperature typically varies from 15°C to 31°C and is rarely below 13°C or above 34°C. During the cool part of the year the outside temperature is comfortable for any type of activity; while in the warm part of the year, the outside can be perceived as too warm. During these times cooling may be necessary. To achieve this two methods are available: active and passive cooling. Active cooling uses an outside energy source, most commonly electricity; whereas passive cooling makes use of natural phenomena to create the feeling of freshness. The choice of the most suitable technique depends on the use of space we aim to cool, while keeping in mind economic factors, maintenance and environmental considerations. Our aim for this project was find a cost effective and environmentally responsible solution for the variety of spaces described in the competition brief. In order to reach this goal we have chosen to use both active and passive cooling techniques. Smaller spaces such as meeting rooms, auditorium, offices and smaller exhibition rooms are cooled by conventional air-conditioning; where’s large exhibition spaces for events use passive cooling. The local climate allows us to make use of the constant breeze coming from the sea to cool large enclosed spaces.

The whole project is designed in such a way to allow the wind to flow freely across the site. Different parts of the program are placed in small scale buildings and spread around the city block. Local palm trees, planted in the wind corridors, create shadows on the concrete walls and keep them cool. 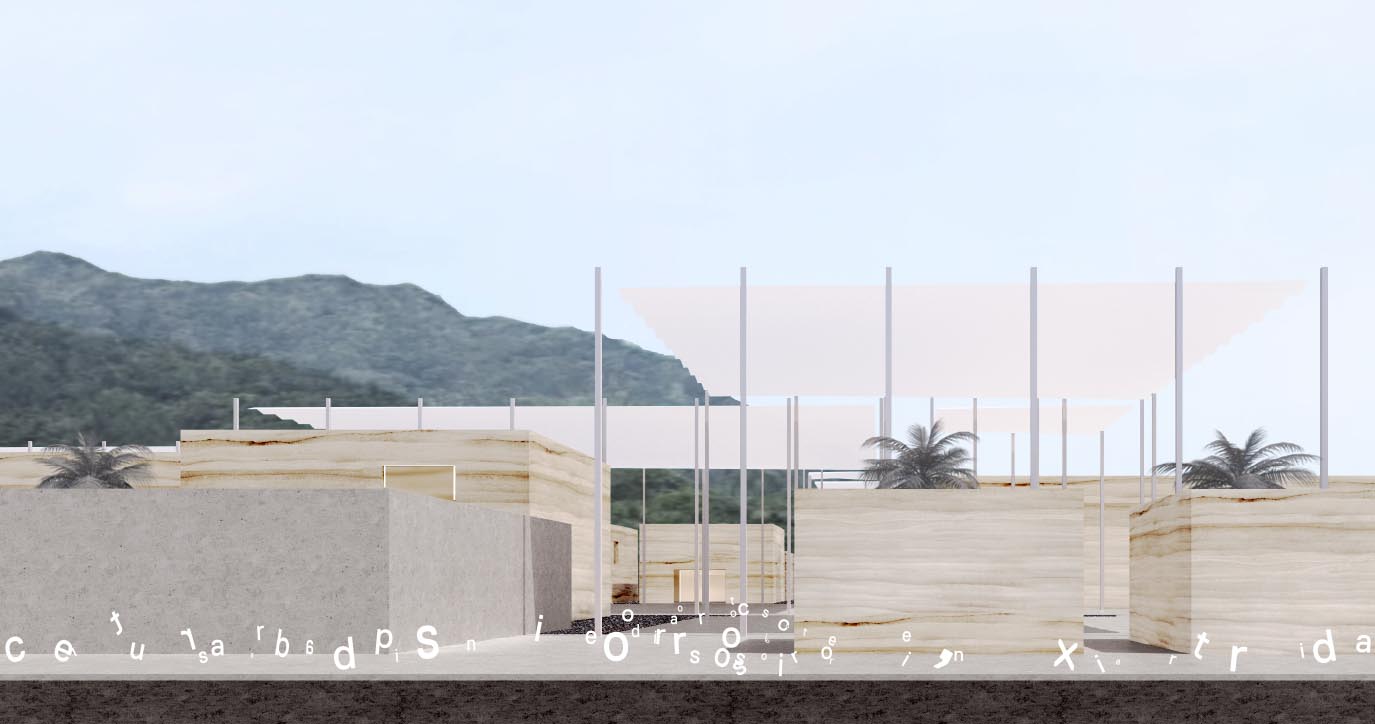 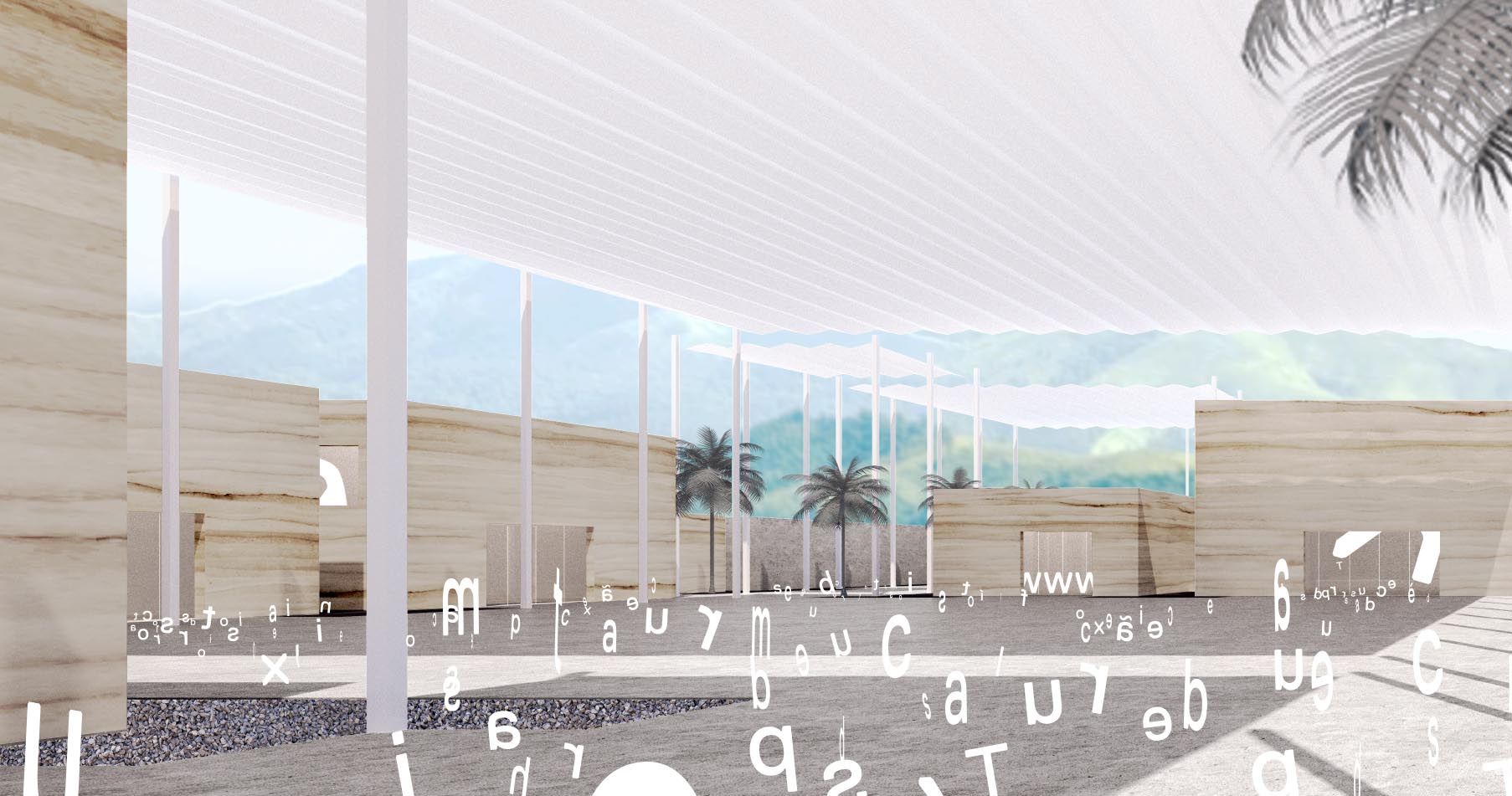